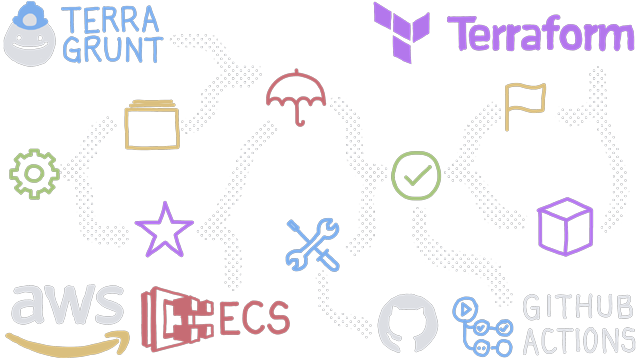 CI/CD Workflow for AWS ECS via Terragrunt and GitHub Actions

Terragrunt is a thin wrapper for Terraform that provides extra tools for working with multiple Terraform modules, remote state, and locking. It also provides a powerful and flexible way to hierarchically provide configuration to Terraform, without duplicating code across environments, AWS regions, and AWS accounts – keeping your Terraform config DRY. 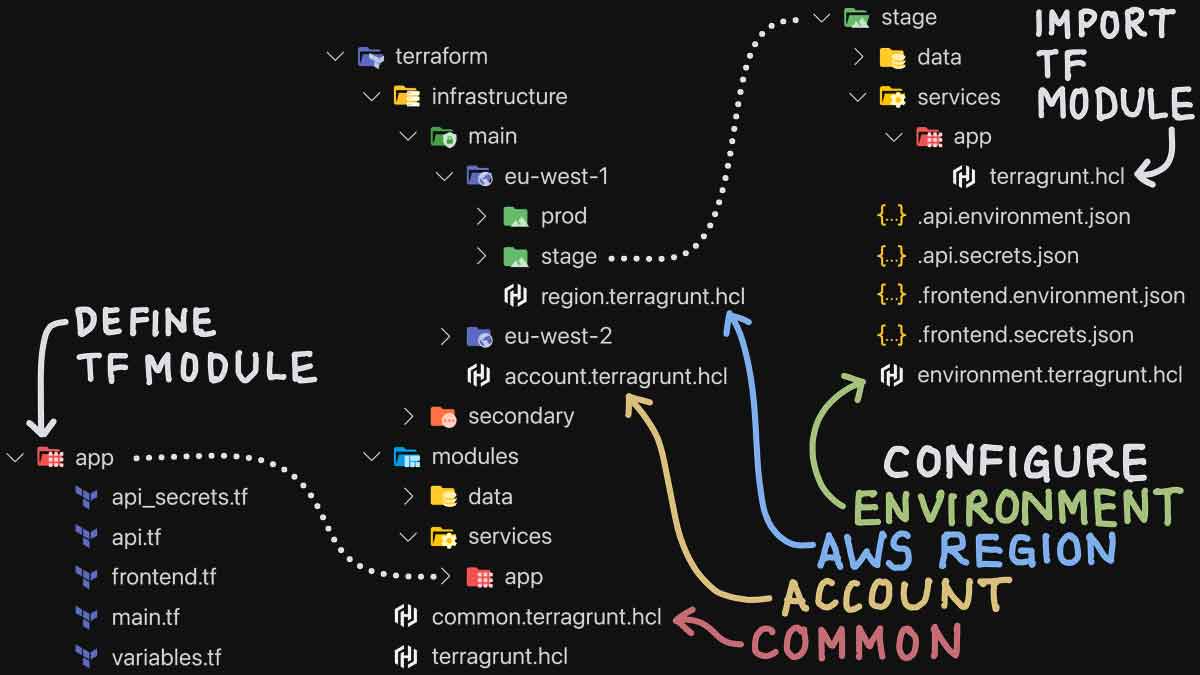 Managing Terraform config across accounts, regions, and environments with Terragrunt

The following hierarchy is proposed (aligned with directory structure): 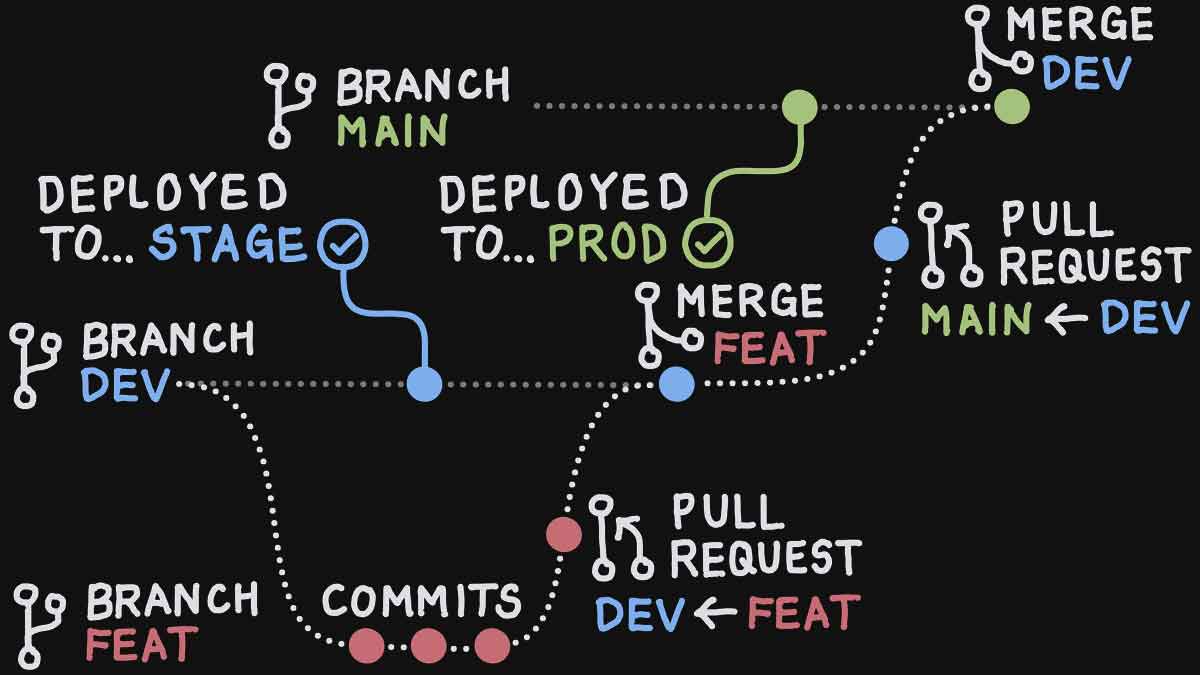 The companion repository contains functionality to deploy code to AWS ECS simply by adopting GitHub Flow principles. All integration and deployment steps are managed by GitHub Actions workflows, including: Unit testing, building and pushing Docker images, and releasing new images to the correct ECS cluster via Terraform and Terragrunt. Create a branch, push, create a pull-request, and, after verifying checks, merge all changes - these are the only steps needed to deploy new features by adopting this approach.

Both remote state and provider are dynamically defined for each deployment target (e.g., prod vs. stage environment) and AWS account ID (e.g., main vs. secondary account). This means, prod and stage environments (which may even be residing on two separate AWS accounts) adopt separate remote state backend configurations, depending on which environment subfolder terragrunt commands are executed from. Review this file and the nested Terragrunt configuration files in the companion repository for the detailed implementation.

Common variables, such as the app name, base domain name and hosted zone name, which apply to the project are configured in a separate file:

Similarly, the region configuration is provided in the nested level:

Environment configuration regarding both infrastructure and containers are provided in the nested level. To illustrate a common use case: The stage environment may override variables previously defined in the parent-hierarchy, in tf/common.terragrunt.hcl, and for instance add a prefix stage.* to app_domain_name.

Environment variables for the respective deployment target (e.g., for stage environment) are provided alongside terragrunt configuration in JSON files, following the naming .service.environment.json, and by specifying both keys and values. These files are committed to source control, since they do not contain any sensitive data. Adding a description key-value pair will inform development and ensure consistency of variable assignment.

No secrets are present in code or source control — secrets such as database passwords or secret keys are generated as terraform resources, and stored within Systems Manager Parameter Store. Following the design of terraform state, they are additionally stored within remote state backend. While S3 backend supports encryption at rest, remote state is to be considered sensitive data.

Easily add continuous integration workflows for unit, integration, and e2e tests by adding a GitHub Action workflow. The companion repository includes an example for testing the API service via Pytest.

To support branch-aware continuous deployment of code to the respective environment, a GitHub Actions workflow is provided.

The workflow is based on Terraform's guide for automating Terraform with GitHub Actions, and adds support for nested configuration via Terragrunt. With this workflow, pull-requests will trigger terraform plan, and merging these pull requests will trigger terraform apply to deploy to the correct environment: Branch dev will deploy to environment stage and branch main will deploy to environment prod – all following the specified hierarchical configuration defined in *.terragrunt.hcl files. Review this file in the companion repository for the detailed implementation.

This article describes a flexible CI/CD workflow for AWS ECS based projects. Using GitHub Flow, changes to the infrastructure and/or codebase are deployed to the intended deployment targets.

Thanks for reading. I'm curious to hear your thoughts on this topic – don't hesitate to reach out to me on Twitter or start a discussion in the companion repository on GitHub!

Enter your email address below to receive an email whenever I write a new post.

Note: You can unsubscribe by clicking on the unsubscribe link included at the bottom of every email. 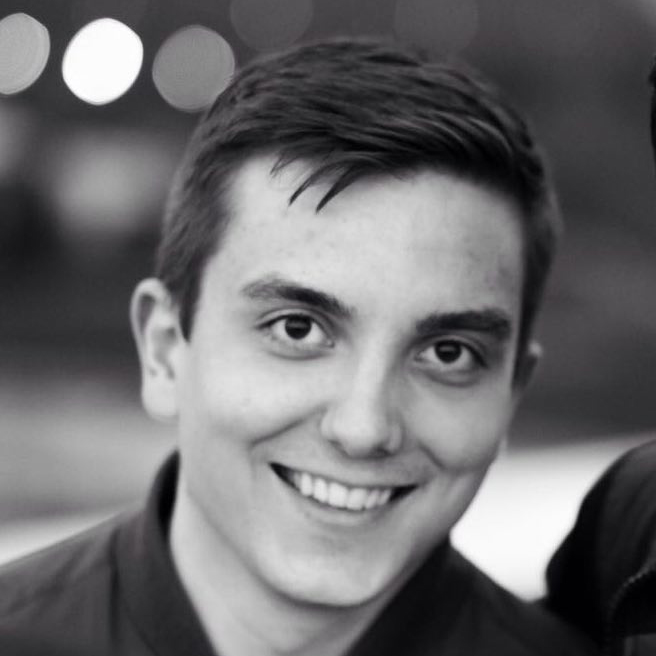